"Many say that it is ethnocentric to claim that our religion is superior to others. Yet isn't that very statement ethnocentric? Most non-Western cultures have no problem saying that their culture and religion is best. The idea that it is wrong to do so is deeply rooted in Western traditions of self-criticism and individualism. To charge others with the 'sin' of ethnocentrism is really a way of saying, 'Our culture's approach to other cultures is superior to yours.' We are then doing the very thing we forbid others to do."
"It is no more narrow to claim that one religion is right than to claim that one way to think about all religions (name that all are equal) is right."
Timothy Keller, The Reason for God 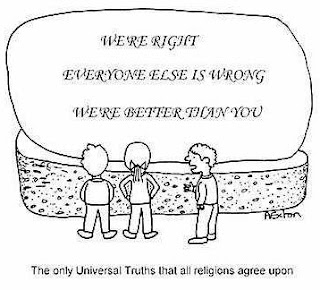 I have various thoughts about this quote of Keller’s. On the one hand, I respect his reasoning, and I think his book is excellent.
On the other hand, I do not totally agree with this statement about ethnocentrism.
Yes, it is true – and good to think about – that it is impossible to escape our human situation. That is an irony of us trying to “step outside of” our situatedness, to develop a model like Bennett’s DMIS, discussing what it is to be rooted in one way of experiencing and seeing the world (what we call “ethnocentrism”), and what it is like to “grow” or “develop” to a point of knowing our own culture in the context of other cultures and worldviews, etc. (what Bennett calls “ethnorelativism”). Any model, as Keller indicates, is still rooted in a human tradition, a human vantage point, and is subject to critique.
But is Keller rightly using the term “ethnocentric,” and is he accurate in his critique?
Or put another way, might we distinguish between an ethnocentric and a non-ethnocentric way of believing that a religion (or a religious truth, or any truth) is right or true? (And is it the same to claim that your culture is best, as to claim that your religion is right?) 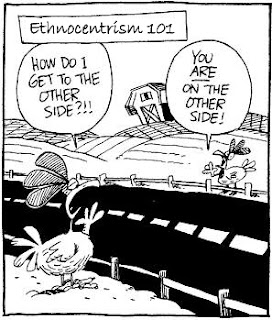