“A new type of person whose orientation and view of the world profoundly transcends his indigenous culture is developing from the complex of social, political, economic, and educational interactions of our time.”
Peter Adler, quoted in Bennett, “Towards Ethnorelativism”
(I wonder why he didn’t also say “religious” interactions? But that’s another subject…)
According to Adler, the “multicultural person” is one whose “essential identity is inclusive of life patterns different from his own and who has psychologically and socially come to grips with a multiplicity of realities” (quoted in Bennett).
Bennett refers to such as person as having developed to the ethnorelative stage of Integration. 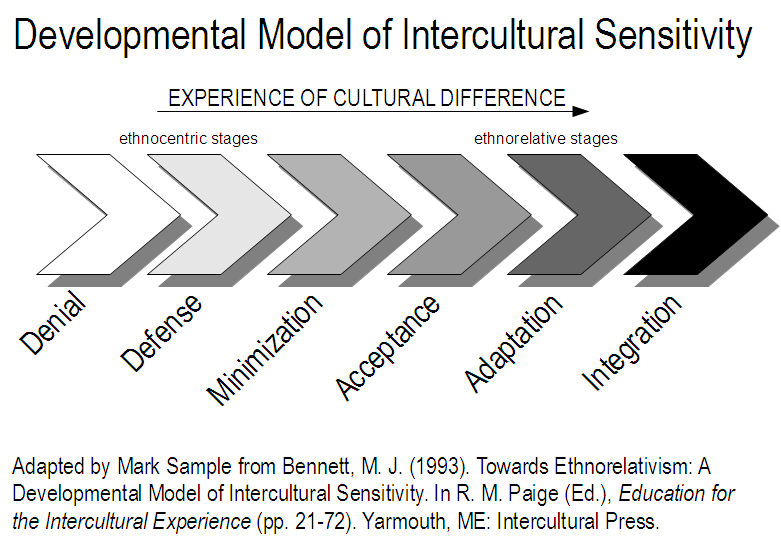 At the stage of Integration, a man or woman has come to be culturally marginal, existing on the periphery of two or more cultures. One is no longer straightforwardly at home in his or her original culture, neither has s/he assimilated to a different culture. The “integrated person” is not particularly affiliated with any one culture, but “can function in relationship to cultures while staying outside the constraints of any particular one” (all subsequent quotes, unless noted, are from Bennett).
People at the stage of Integration are living in the realm of what Bennett calls “contextual evaluation” – i.e., behavior is determined to be appropriate or not depending on the context (he asks the questions, “Is it good to take off my clothes?” and “is it good to refer directly to a mistake made by yourself or someone else?” and answers both by, “It depends on the circumstances” or context), and have the ability to choose from a range of different cultural responses, to given situations.
“These people see their identities as including many cultural options, any of which can be exercised in any context, by choice. They are not so much bound by what is right for a given culture (although they are aware of that) as they are committed to using good judgment in choosing the best treatment of a particular situation. … They are conscious of themselves as choosers of alternatives…”
Bennett points out that marginality “describes exactly the subjective experience of people who are struggling with the total integration of ethnorelativism.”

“They are outside all cultural frames of reference by virtue of their ability to consciously raise any assumptions to a metalevel (level of self-reference). In other words, there is no natural cultural identity for a marginal person. There are no unquestioned assumptions, no intrinsically absolute right behaviors, nor any necessary reference group.”
For a personal example of what Bennett means, I enjoyed listening to the interactions of my daughter (a TCK who grew up in , and , and has also spent significant time in , besides attending University in the ) with my brothers, all of them pastors or theologians. I would hear one of them make a statement about something (anything), including a phrase like, “the Bible says…” I would listen for my daughter’s response, and inevitably I would hear something like, “that’s one way of reading the Bible; but there are Christians who interpret that statement differently…” That, in a nutshell, is the perspective of a person who is living in the ethnorelative, marginal realm of Integration – they are always able to see things from different perspectives, and from outside of any one framework or cultural setting.
There are two possible phases of marginality, within Integration. At first, one might experience what he calls “encapsulated marginality,” “where the separation from culture is experienced as alienation,” and “constructive marginality,” “in which movements in and out of cultures are a necessary and positive part of one’s identity.” I have seen these two kinds of marginality with TCKs (third culture kids, i.e., people who grow up in a cultural setting that is different than their passport culture). For TCKs at the point of encapsulated marginality, the question, “where are you from?” may trigger an identity crisis – “I don’t know where I’m from; I don’t know who I am; I don’t know where I belong…” But for those who have developed to the point of constructive marginality, they may have come to have a positive sense of identity as a TCK – “I can go anywhere; I can adapt; I can fit in – I’m a TCK!”
Bennett concludes that “constructive marginality can be the most powerful position from which to exercise intercultural sensitivity,” and points out that “Cultural mediation could be accomplished best by someone who was not enmeshed in any reference group, yet who could construct each appropriate worldview as needed.”
Given the ever-“shrinking” world, with peoples traveling and migrating from and to just about everywhere, there is a desperate need for people who have learned not only to adapt to cultural difference, but to internalize different cultural frames of reference and to live on the cultural margins. Such people can function as “bridge” people between different groups who are different, not just for mediating conflict (for which there is ample need), but also for mediating understanding and interaction.
For more detail, see
Bennett, Milton J., “Towards Ethnorelativism: A Developmental Model of Intercultural Sensitivity.” In Paige, R.M. (Ed). (1993) Education for the Intercultural Experience (2nd ed., p. 21-71). : Intercultural Press.
Bennett, Milton J., “Becoming Interculturally Competent.”  In Wurzel, Jaime S., ed., Toward multiculturalism: A reader in multicultural education (2nd ed., pp. 62-77). : Intercultural Resource Corporation, 2004.
Posted by Mideast Mag at 7:28 AM