Beyond Ethnocentrism – Growing in Love of Neighbor Through Growth in Intercultural Sensitivity (1): Acceptance

“One of the ways people inevitably increase their awareness when learning about other cultures is to move from thinking ‘My way is the only way’ toward thinking ‘There are many valid ways’ of interpreting and participating in life.”
Brooks Peterson, Cultural Intelligence
In Bennett’s DMIS (Developmental Model of Intercultural Sensitivity), growth toward a richer, fuller, more positive experience of cultural difference, i.e., growth in intercultural sensitivity, is marked by a transition from ethnocentrism (with stages of Denial – Defense – Minimization) to what he calls ethnorelativism (with stages of Acceptance – Adaptation – Integration). 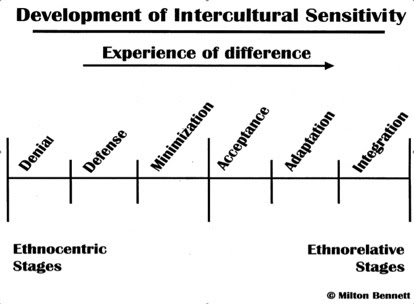 This growth is characterized by a shift from the experience of one’s own beliefs and behaviors (culture, worldview) as “just the way things are,” to the experience of one’s own beliefs and behaviors as one organization of reality among many viable possibilities (i.e., one’s own culture is experienced in the context of other cultures) – as in the Brooks Peterson quote above. From being unknown, alien, absurd, threatening, insignificant, etc., the cultural difference of others becomes (or begins to become) known, real, comprehensible, respected, etc. This change involves a worldview shift – the world is seen and experienced differently, by a person who is becoming interculturally sensitive.
The movement from ethnocentrism to ethnorelativism is characterized by the development of cultural self-awareness, accompanied by a growing awareness of different others (i.e., of what makes others different, how they are different). (Note that in a different context, Stephen Covey points out that self-awareness is the key human gift, unlocking all other unique human potential, and that without self-awareness we cannot know others, because we treat them as if they were the same as us.)
Part of the growing awareness of others, and of cultural difference, involves beginning to see both the behavior and the values of people from other cultures, within a cultural context (i.e., as understandable within their cultural context).
“people begin to see alien behavior as indicative of profound cultural differences, not just as permutations of universal (and probably ethnocentric) laws”
“Alternative beliefs about both what exists in reality and the value which may be attached to those phenomena are respected as viable, at least as they are expressed in a cultural context.”
Milton Bennett, Towards Ethnorelativism (emphasis mine)
Movement out of ethnocentrism also involves questioning the universality of our experience, our models, our ways of doing things (be it in education, economics, politics, development, leadership, the way we do church life, or whatever realm). One way in which I experienced movement from the “minimization” stage of ethnocentrism, into a more ethnorelative approach, was in realizing that the apparent fact that Egyptians I knew did not seem to live according to Covey’s 7 Habits might not mean that Egyptians are not effective, but that the “7 Habits of Highly Effective Egyptians” are different than Covey’s 7 Habits (i.e., that Covey’s 7 Habits might not be universal). This seems obvious in hindsight, but the idea that a model which works for us is universally applicable, has a powerful force which is hard to escape.  Once we become more aware of the reality of cultural difference, anyone’s claim to have a “universal” model, approach, or solution, should cause us to see red flags and hear alarm bells.
Moving into Ethnorelativism: Acceptance
The first stage in the ethnorelative experience of cultural difference, in Bennett’s model, is Acceptance. Acceptance is characterized by curiosity about cultural difference, and a growing respect for difference. As one moves into Acceptance, s/he does not necessarily have a deep understanding of the difference which exists, but there is at least a realization that there is difference to be discovered, accompanied by a positive attitude toward exploring and discovering the difference. 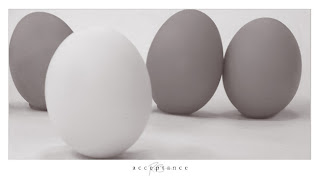